After a few days away enjoying this wonderful weather we are back and full systems go with kit car and Cross Kart production.

We have however realised that we missed an anniversary it was just over 15 years ago we became an exhibiting manufacturer at Harrogate Kit car Show.

A trip down memory lane:-In circa 2003 a friend of mine was thinking of building a kit car ….

I was no stranger to the seven style of car having built, run and prepared various Caterham’s and Westfield’s in club race series alongside our other championship campaigns and had previously converted a Westfield SEi from its trusty ford crossflow engine to a bike engine ( Suzuki RF900 engine ). Guided at the time by some grass tracking friends who had been using bike engines for a while…. the only thing that was overlooked was they were running them in their correct orientation.

After a few/lot of beers that evening, after the show, I decided that I would make two: one for myself and one for my friend. I bought the Ron Champion book and set about sketching, designing and altering his initial concept. Fortunately we had some good contacts from our higher profile race series who helped with the initial suspension design.

Just under 6 months later we had built 2 cars and were exhibiting, within 25 minutes we had sold our first car ……
It’s amazing to think back now how we managed at the time with no CNC machines of our own and very crude and limited machinery.

I remember making the first solid versions of the Vortx body 12 months prior with hours of sanding / filling / blocks of wood etc to get the shape, a long arduous process, which today in this modern age has been replaced by our CNC router and specialist tooling foam , this has increased accuracy and quality tenfold: we are now cutting intricate shapes with tool as small as 3mm diameter for amazing definition and shut lines on all our bodywork bucks that are then transformed into moulds and ultimately into beautiful quality bodywork sets for us at ISO standards that I believe are unsurpassed in the industry.

Every tube of the original cars were cut in a chop saw and hand profiled by a grinder , later replaced with ( a game changer at the time ) an abrasive tube notcher which was horrendously noisy and shot sparks everywhere. Even this at one time game changing tool is now a distant memory, as it has been replaced with our own CNC tube cutter, which marks, engraves, and then cuts every single tube for our cars. 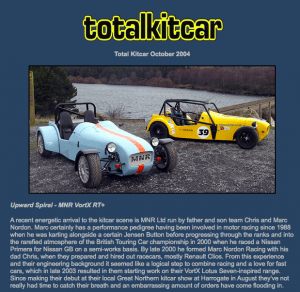 Many of you will remember the excitement when it finally arrived from the States, however it became evident it wasn’t going to be as straight forward as original thought. Not as simple as plug and play devices these days as it worked off imperial measurements and not metric.

Every roll cage was sand filled heated and bent round a former, my first attempt rather naively was using building sand (rather than kiln dried sand). The damp sand and a sealed vessel I was heating I basically created a bazooka and sent the tube end cap at great speed through one of our windows -never to be seen again. Luckily again this practice was superseded by the purchase of a ball pulled CNC tube bender much quicker, considerable more accurate and definitely safer.

Originally every bracket on the chassis was hand made. This took an age and meant we had 3 or 4 common brackets that we used in as many ways as possible, this was superseded by contacting a local laser cutting company, but as demand grew it was deemed that to keep improving the quality and bespoke nature of the cars and integrate more bracketry to make the cars easier to build we needed to bring this in house so we purchased a CNC plasma cutter that could cut aluminium , steel and stainless steel, again another godsend as originally every floor panel / sheet had to be guillotined offered into place marked then drilled and then offered back to the chassis drill the chassis and then finally glued and riveted in place , todays practice is load sheet press start , it then proceeds at great speed to cut every rivet hole and profiles the panel in just under 2 minutes !!!

As time progressed car and kit sales continued to increase, the designs evolved, parts got lighter and fancier. We did have a lathe and milling machine but both where old manual machines that were ok for the odd part but to ensure repeatability, accuracy and deliver the finish we wanted we found ourselves having more and more components CNC machined by our good friends at a local machining company, a great family business who were brilliant they could work from a rough sketch add a bit of finesse to produce stunning quality parts, problem was they were that good they were always booked up well ahead.

It also coincided that on one of my many visits there they happened to mention that they were upgrading one of their machines and would I be interested in purchasing the machine that had made many of our parts, so a deal was struck and we now had a CNC lathe…. One slight problem is I had never so much as turned a CNC lathe on , luckily Richard from the machine shop very kindly gave me hours of his time and trained me up and we were now making every turned component in house.

However I wasn’t quite finished with my love affair of CNC machines……..
Although we were now making the lion’s share of our parts in-house we still relied on buying in milled components made / retailed by third parties and had noticed in our constant quest of improvement that some tolerances could be better, we had hubs that didn’t have correct bearing fit tolerances, an oil pan that had 7.5mm holes for 6mm bolts to allow for an error in the bolt spacing the list continued on these universal parts we had incorporated on many of the earlier cars. once again the brilliant help and guidance from Richard we bought a CNC vertical machining, this time the purchase was made online….. a week later an artic truck arrived carrying what can only be described as a monster.

The pictures I had seen led me to believe that the machine was somewhat smaller than it was!!! The reality was it was 8 tons of machine that once hiabed off the lorry took 2 days and the removal of a second floor to position it in the machine shop ….. we were now fully equipped machine wise so the next logical step was to improve our cad / cam software to help turn any new parts from a concept into reality much quicker and speed up our programming times.

There are a few special mentions I must make as none of this would have been possible without these people :-
The late Chris Meek who had supported me through my earlier racing and had suggested that, as it became clear as I was not going to be the next British F1 driver, the best option was to build the cars instead and had somehow managed to persuade a good friend of his to let me do work experience at his specialist rollcage / shell preparation company which after 4 weeks became a full time job.

Dave Cook of Dave Cook racing services who gave me my first job, and the fantastically talented guys I worked alongside had the patience to teach me.

David Gathercole who broadened my knowledge to include race car, race engine preparation and build.
Ian Bownass the original catalyst for the decision to enter the Kit car world , IT expert, Kitcar show salesman, and one of my best mates.
Richard, Karen and Neil at R and K metal components for their expertise and guidance in the world of CNC machining.
Bob Holmes who produced our first ever set of Vortx bodywork.
Stuart Pease, Glen James, John Smith and the rest of the team for making our moulds and fibreglass.
Lee Baverstock of Garagisti, our very good friend and resident rocket scientist that quite frankly is a design and cad genius, who not only has designed many of our components but also has a very impressive history in the industry with designs for other manufacturers too, and what’s even more incredible is this isn’t even his full time job.

My staff and especially my right hand man Wez, who has been there most of the way through the evolution and in some case revolutions too ……

My Father, who up until three years ago had worked 6 / 7 days a week alongside me, promoting the business, doing the sales and admin and also supporting me all the way.

My late mother who allowed me to me commandeer all available outbuildings on her small holding, and build more ………. Her support / company and 4am coffee making was always well received during many an all nighter at work.

My partner Sarah (who now does all the admin) and my two children Bella and Louis, for their support / patience and understanding.

And finally a big thank you to all the people we have met over the years and become our friends and valued customers.

The last 15 years have been a roller coaster of a ride and a constant challenge that I have enjoyed enormously, and we will continue to keep pushing ahead with new cars and components for a good few more years to come.

We use cookies on our website to give you the most relevant experience by remembering your preferences and repeat visits. By clicking “Accept”, you consent to the use of ALL the cookies.
Cookie settingsACCEPT

This website uses cookies to improve your experience while you navigate through the website. Out of these cookies, the cookies that are categorized as necessary are stored on your browser as they are essential for the working of basic functionalities of the website. We also use third-party cookies that help us analyze and understand how you use this website. These cookies will be stored in your browser only with your consent. You also have the option to opt-out of these cookies. But opting out of some of these cookies may have an effect on your browsing experience.
Necessary Always Enabled
Necessary cookies are absolutely essential for the website to function properly. This category only includes cookies that ensures basic functionalities and security features of the website. These cookies do not store any personal information.
Non-necessary
Any cookies that may not be particularly necessary for the website to function and is used specifically to collect user personal data via analytics, ads, other embedded contents are termed as non-necessary cookies. It is mandatory to procure user consent prior to running these cookies on your website.
SAVE & ACCEPT